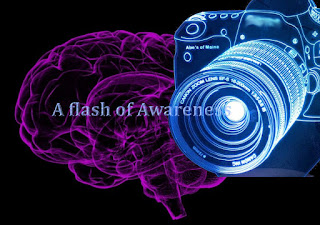 A camera shutter allows a camera to capture a fresh view each time it opens for a moment. A registered image is not clear if the ambient lighting is poor. A camera flash assures sharp and clear images even in such conditions.

All human beings experience moments of expanded consciousness for brief periods from time to time. These brief moments are like the camera shutter being open. This can happen during a long run to some, while painting a beautiful picture to some and during a pleasant social interation to some. Higher awareness comes as a ligtening according to ancient texts on consciousness. Human nervous system must be trained to retain the memory of these brief experiences. The memory of such events otherwise becomes useless like a picture captured by a camera in poor lighting conditions.

Ancient Seers named the nervous energy which brings flashes of higher awareness as “Bhairavi”. Expanded state of consciousness is “Bhairav” consciousness. The Sanskrit text Vigyan Bharaiv records 112 differennt methods by which a human brain is made to experience Bhairav consciousness by bringing esoteric knowledge or Vigyan to the brain.

Group settings and the presence of a Meditation Master act like a camera flash. The brain is able to retain the memory of expanded awareness in a special way in the presence of a Guru whose consciousness is already expanded. Understanding these techniques from a book is like taking a picture in poor lighting conditions. Vigyan Bhairav and other texts present methods in a  cryptic manner to prevent these methods from becoming like a poorly shot picture. An expert like Sri Sri Ravishankar decodes these texts in the “Unveiling Infinity – Meditation Immersion sessions”.