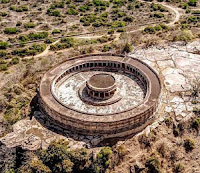 Edwin Lutyens used the layout of a Tantra temple in Morena, central India as the blue print for the Parliament building in New Delhi. This beautiful temple to 64 Yoginis now stands as a symbol of the rich Tantra hertage which the world almost forgot.
Tantra scholars of a bygone era had also captured their knowledge in Sanskrit texts. The best among them is “Vigyan Bhairav Tantra” which describes 112 meditation techniques in a cryptic way. It takes a meditation master to unlock the cryptic codes in this text.
There are 64 Yoginis and 64 Bhairavs in the Tantra tradition. The expansive power of the human mind is the nature of one of these 64 Bhairavs who is called as the Vigyan Bharav. Vigyan Bhairav Tantra contains profound techniques which guide the mind towards its expanded potential. Ancient texts made an assumption that an expert will use them to guide others.
Recently, was fortunate to experience the depth of knowledge in the Vigyan Bhairav text with Sri Sri Ravishankar. I felt the ancient knowledge of Tantras coming alive once again in an experiential sense. My daily meditations have been richer and deeper ever since. Sri sri Ravishankar is coming to San Jose in July to offer this experience to Silicon Valley folk. Here is the link for the program at San Jose Convention center