For example, the Gandharvas are considered as the cause for a peak sensual experience in the human nervous system. Their nature is therefore considered to be amorous. The stories in the Vedas connect Gandharvas with Soma, the Devata associated with exhilaration. Gandharvas, though they don’t have a physical body, enjoy the sense of thrill within the nervous system of stage performers such as a rock star. They gift humans with the skill to enthrall a large audience. In that sense they create resonance among all nervous systems present in a concert hall. This influence of the Gandharva principle in the Vedas can be seen in Earth’s electromagnetic system and the human brain’s neural network suggest.

Sandwiched between the ionosphere and the ground, and charged by lightening strikes around the globe, earth’s atmosphere resonates at very low frequencies. These resonances are called as the Schumann resonance after the scientist who discovered them in 1960. The entire atmosphere of the earth acts as a single large cavity for electromagnetic waves which originate naturally due to currents created by lightening. Such electromagnetic waves have a peak intensity, strangely, at the frequency of 7.83 Hz which is the frequency of the alpha waves in the human brain. Ever since the 1920s scientists have made an effort to understand the source of the EEG signals such as the Alpha waves in the human brain. 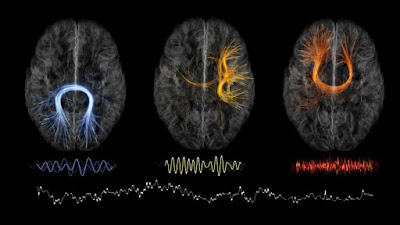 Scientists who measured the resonant frequencies of the earth’s atmosphere had speculated on the close connection between these low frequency signals in the earth’s atmosphere and similar frequencies in the human brain as early as 1952. Some forward thinking scientists have proposed a evolutionary interaction between human consciousness and earth’s geomagnetic field. Recent advanced brain imaging attempts by Montreal Neurological Institute are showing that the interactions between different areas of the brain follow different neural rhythms. Different parts of the brain oscillate as an entity during the process of cognition.

Rishis associated Gandharvas to certain rhythms between the lunar and solar cycles. They called out certain resonant interactions points and gave them names after a particular Gandharva. They viewed Gandharvas to be 27 in number sometimes and 3339 at other times as seen in the following clip