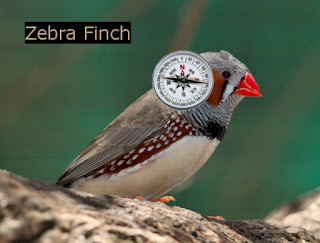 A different kind of space permeates the manifest space per Vedas. Scientists convey the same idea in a slightly different manner. The world is made up of atoms. There are subatomic particles below the level of atoms. Subatomic particles such as electrons can also behave like waves. Familiar laws of physics do not apply at the quantum level which is the plane in which electrons exhibit their wave nature. Coversely, atoms shield out the bizzare behaviours observed by scientists at the quantum plane. Scientists are however beginning to understand the fact that the qualtum field may be influencing activities in the manifest space. The following is a great example.

Scientists have been studying the biology of the migrating zebra finch which uses the magnetic field of the Earth for its annual journeys. Scientists know with certainty that the magnetic field of the Earth can not directly influence the biological system in living beings. Weak magnetic fields can only influence processes at the plane of quantum mechanics. Scientists therefore searched for an evidence of quantum coherence within a biological molecule. Peter Hore of the University of Oxford and his colleagues recently isolated a cryptochrome from the retina of the zebra finch. They claim that light or photon triggers long lived quantum coherence within this molecule.

The vedas talk about a different kind of space from which the manifest space has originated. Cosmologists also say that manifest space arose as a tiny bubble in a uniform field of quantum energy. The Yajur Veda says that a famous Gandharva being with the name Vēna contemplated on the nature of existence and concluded that this other kind of space is interwoven  (ōtah) with the space of matter. This space is inlaid (prōta) in the space of matter. We have a scientific confirmation that two planes of existence, one quantum and other atomic do interact, at least in the case of the migratory ability of the zebra finch.