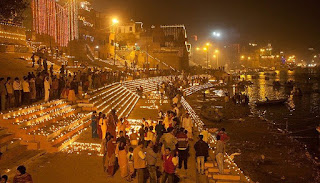 Indians, especially those who live along river Ganga celebrate Dev Diwali on the full moon of the Karthik month (Nov-Dec). It is the culmination of the fortnight of the Diwali festivities in Northern India. Dev Diwali is celebrated grandly in the Southern state of Tamil Nadu by the name Karthigai Deepam. The front porches of households in Tamil Nadu are decorated with earthen lamps at Sunset on that day. The next day is celebrated as Kuppai Karthigai when Earthen lamps are lit near the garbage dumpsters, bathrooms and the back yards. The word Kuppai in the Tamil language refers to garbage.

The cycle of existence is formed by the positives and the negatives. The human mind in its strife for the best can forget this principle and fall into depression, especially when it encounters a negative side effect. Waste and garbage are a part of a human society. Today the world in its quest for modernization is struggling to handle its waste. Citizens seldom think about the mountains of garbage that cities and towns produce. The only question that arises in people’s mind when they pass by a massive garbage mound is – why is nobody taking care of this? Shouldn’t they acknowledge the garbage which is a part of their everyday life deeply?

The ancients took every opportunity to highlight the duality in every aspect of existence. Isn’t a dumpster which is tucked somewhere out of sight in a house as important as the charming front porch of a house? Honoring the dumpster once a year is not a bad idea under today’s circumstances either.  Can there be a better way than honoring the household dumpsters to get citizens to check in with themselves about their own garbage disposal attitudes? Rishis knew that honoring a negative circumstance was a necessary step to owning the associated problem!