Posted on October 18, 2017
There has been a tradition of honoring Devi, the divine feminie, on three special nights annually since time immemorial (Watch embedded Video below). These celebrations have survived with some modifications over the centuries. The first of these three is Moha Ratri (the night of Delusion principle). It is a full moon night in spring (Lunar month of Phalgun). Kala ratri (the night of Time principle) falls at the mid point in the bright fortnight at the beginning of fall (Lunar month of Ashwina). The third of these is Maha Ratri (Great Night). It is a moon night at the end of fall (Lunar month of Karthik). 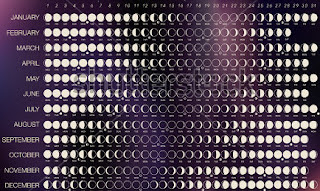 There is a distinct astronomical coincidence among the three nights. A lunar month is approximately 29 days long. Lunar fortnights are 14-15 days long. The half point of a lunar fortnight falls between its 7th day and its 8th day. Kala Ratri is celebrated at the half way point in the bright fortnight of the lunar month of Ashwina. There is a new moon at the beginning point of this fortnight. A full moon occurs around this same point, in the month of Phalguna. The new moon phase of Ashwina fortnight is shifted by one unit on Maha Ratri night.