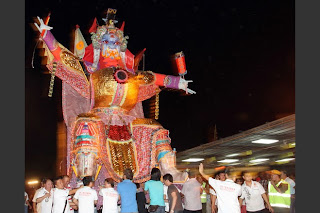 Countries with Chinese population celebrate the hungry ghost festival in the month of August. The seventh lunar month on the Chinese calendar is the time to honor and respect the ancestors in Singapore, Malaysia, Taiwan and other countries. The offering to fire during the festival includes paper replicas of money, cars, houses and recently even iPads. Wall Street Journal write up on the topic describes inflation catching up even in the after world.
The fortnight prior to the seventh month is also the time for remembering the ancestors as per the Indian calendars. Since the Hindu calendar starts with March-April, this period falls right before the Navarathri festival. Chinese feel proud of their seventh month traditions. But Indians are generally shy in acknowledging their fortnight of ancestor worship. Malaysia with a Muslim majority has integrated the cultural aspect of the occasion into their national celebration while secularists in India want native traditions such as the remembrance of ancestors to be taken behind a veil. Halloween is slowly entering on the Indian scene today.

There are a few interesting points about Halloween tradition that is popular in North America. Many historians believe that the Halloween, a Christian celebration, was made to coincide, in the ninth century, with the Irish Samhain festival. In older Irish traditions, Samhain was a time when the door to the otherworld opened enough for the dead to communicate with us. Samhain was a festival for the dead. The pagan roots of the festival today dominate the popular Halloween parties. Interestingly, the word Samhain has a Sanskrit root Sama, meaning equal or season, and the name of the month October, in which Halloween is held, in Sanskrit means the Eighth Sky!