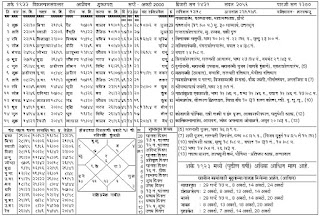 One of the five essential components in a Hindu calendar is the mysterious Nitya (daily). The other associated four are Nakshatra (lunar mansion), Vara (Weekday), Ththi (Lunar phase) and Karana (Half a Thithi). The word Yoga in Sanskrit refers to Harmony, Unison or Synchronicity. Panchang makers are clear of the mathematics behind the rotational speed of the Yoga point. We don’t however get any clue from them on what objects in sky come into harmony at the Yoga point. Let us look at the astronomy behind the combined movements of the moon and the earth around the sun for a clue. 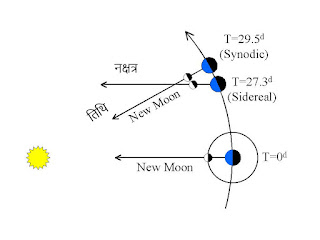 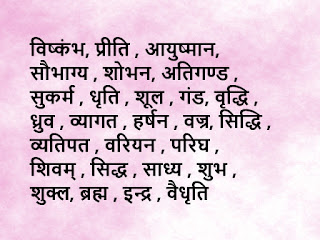 The elusive point of harmony between the two rotatons of the moon is an ingeneous abstration of Rishis.It is like a second moon of the Earth which rotates at the rate of 25 days. Yoga point moves at the combined rate of the moon around the Earth and the Earth around the sun. Panchang makers assume it to be at 91° and 20′ from a new moon which can occur exactly at the first point of Aries. It creates a different Yoga effects in every one of the twenty seven Nakshatras or divisions of the sky. Rishis attribute the Yoga point to be an indicator of the influence of air element (Vayu Tattva) on the quality of Time. Yoga point afterall is the fastest moving entity in the sky with an elusive nature like air. Hindu astrologers consider the effect of the Yoga point in studying the harmony/disharmony aspects in one’s life.