Posted on January 6, 2020
Popular movies Star Wars, Avatar and The Matrix are based on a common theme. This theme can be traced back to the works of influential thinkers of the eighteenth century such as Goethe, Coleridge, Wordsworth, and Whitman. Writers like Thoreau and Emerson who influenced early American political thought use this theme in their works. The roots of modern environmental movement too can be traced back to the reflection of the same idea in the works of Robinson Jeffers. Stanford Encylopedia calls this idea as “Pantheism” which is the general view that God is identical with the Cosmos.

Good and Evil are part of the cosmos. They are therefore automatically within God who maintains a balance between them. Devotion to God entails respecting rivers, plants, animals and the entire planet. Vedic texts from a distant past express these ideas lucidly. Did everyone believe in Pantheism during the time when these texts were written? A story from the Puranas, the story wing of Vedic literature, provides an interesting answer.

Long time ago, the worlds had just been created, a child was born in the family of evil doors. His name was Prahlada and he became inspired by Pantheism in an early age. He could not tolerate the cruelty of his father to other creature. Conflicts continued between the Emporer Hiranyakashipu and his son for sometime. 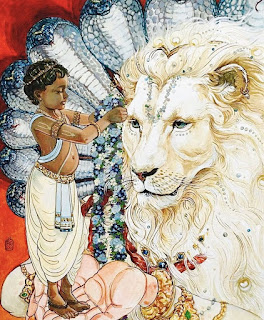 A day arrived when the father declared to Prahlada that Patheism is bogus. Prahlada expressed his confidence that God is present everywhere and affirmed that God resides in the pillar which stood right in front of them. The enraged father split the pillar open to prove to Prahlada that there is no God there. God appeared from the pillar taking a form which had not evolved in nature. God vanished after restablishing order between the good and the evil by taking the life of Hiranyakashipu. He installed Prahlada as the emporer.