Ramanuja, a Vaishnava master from the fourteenth century researched Pancharatra books related to worship traditions which had been handed down for millennia in the Indian subcontinent. He had taken up the study of the Pancharatra texts to rectify confusing worship practices in temples in Tamil Nadu. He brought structure and uniformity to worship practices based on his research.  The Pancharatra texts recognize the human psychology of relating more easily with the world of forms than with the world of pure abstractions. They establishes five distinct modes of invoking the powers of the all pervading formless divinity into relatable structures.

The first mode is called “Sthandila” which is understood to be a small piece of land worthy of hosting the divine energy. The fire altar used in Vedic Yagnas was constructed in a carefully chosen spots of land or “Sthandila”.  Ancient Yogis and Siddhas used their divination skills to choose worship spots where beautiful temple structures arose during historic centuries. A third of historic temples in South India are associated with a Rishi who had chosen the spot in a different era. The fifty one Shakti Stalas found across India are natural energy spots where mother divine’s energy had descended per Purana texts. There are temples in each of the Shakti Sthalas today.

A Yantra is often located beneath the main idol or Murthy in temples. A Yantra, such as the Sri Yantra, is a geometric design. It powers the main idol in temples. The Yantra, which is also called as the “Mandala” forms the second mode of invoking divinity according to Pancharatra texts.

A Kalasha is a common sight in Hindu worship rituals. It is a water filled pitcher with a coconut.  Vedic mantras are chanted to infuse the waters in a Kalasha with the energy of the divine.  The energy in it can then be transferred, for example, by pouring the water on top of an idol. The annual rejuvination ceremony, or the Brahmotsava, is a mandatory celebration in very Hindu temple. Several Kalashas are used during this ceremony. “Kumbha” or the water pitcher is the third mode of invoking the divinity. An idol, or an “archa” is only the fourth mode of invoking the divinity. 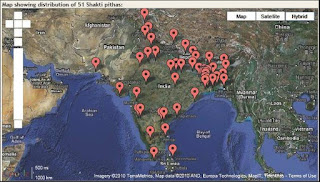 Pancharatra tradition originated during the time of Krishna, an Avatar of the divine. Texts related to temple worship were in wide circulation by the sixth century CE per historians. These texts contain chapters on the science of designing townships, homes and temples. They suggest the possibility of the side by side evolution of the science of designing cities and temple construction.  The principles of Vastu Shastra or designing townships were developed in the ancient cities of the Harappan civilization between 6000 BCE and 3000 BCE per historians such as Fergusson, Cunningham and Havell.