The conclusions from a south Asian gene pool study was published in American Journal of Human Genetics and it challenges the Aryan Invasion theory which has been widely accepted by twentieth century historians. South Asian populace according to this study is an admixture of two local ancestral gene pools. The study also points out the likely hood of one of these two gene pools as having spreading westward and playing a big role in the Eurasian DNA pool. The local population of Harappan civilization after its collapse must have dispersed into rest of India creating a gene melting pot for two millennium, 1900 years ago. All South Asians of today, except those living in north east Indian states show genes of both North and South Indian ancestors.

Rigidity of Indian caste system did not set in till 2000 years ago, according to the gene pool study. This also explains the fact that more than 60% mantras in the Vedas are attributed to Rishis of castes and tribes which the Indian Government today lists as lower. Rishi Vyasa with brahmin father and a fisher women mother and Valmiki, a tribal robber turned sage are popular examples. An interesting story from the Puranas also alludes to the admixture between the northern and the southern ancestral gene pools. Rishi Agastya according to a popular story was deputed to the southern lands to prevent the northern part of the Indian peninsula from sinking due to heavy weights (sages) attending the wedding of Shiva and Parvati. Agastya is seen as a popular figure in Tamil literature of lore. 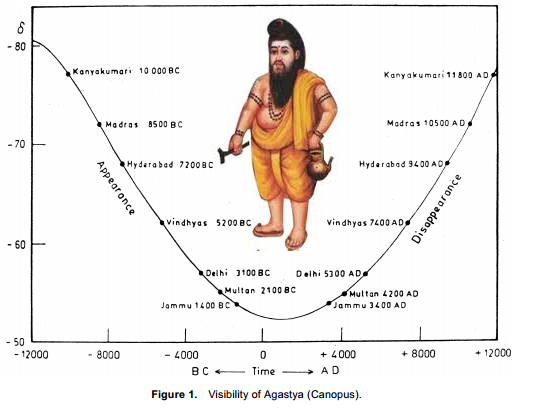 An ancient vedic ritual which was timed to coincide with the end of the rainy season relied on the sighting of a star named after Agastya (Conopus). The sighting of Canopus which is very close to the south pole (-76 degree latitude) before sunrise has a predictable variation between northern and southern India and also varies over the millennium. Studying this variation over the millennium KD Abhyankar has shown that the idea of determining the end of rainy season using the sighting of Agasthya likely originated 5000 years ago. The date of Agasthya’s sojourn over the Vindhya mountains into southern India where Canopus becomes visible earlier than in the north when determined using the variation chart coincides with the start of the DNA pool admixture.