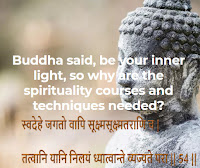 Yes, per Vigyan Bhairav Tantra text, a compedium of 112 different meditation techniques. One of the techniques in this text involves thinking about the subtler aspect of the visible creation.

A biologist thinks of the human body as consisting of molecules. A physicist is with the reality that the human body and the rest of the creation is made up of atoms. An atomic scientist understands that there is space beween a nucleus and the electron rotatng around it. A quantum expert views this universe as a wave function.

A similar view of the world was taught to students in a subject called “Tattva Gyan” in the Indian subcontinent before the time of the British rule. A student was asked to look at the human body as a mix of five rudimentary principles or Tattvas such as the Earth, Water, Fire, Air and the space element. They were taught to similarly view the sense organs, the sensory perceptions and the processes of perception. After this, a student could gradually cultivated the ability to “switch” the mind from the ordinary mode of perception to the Tattva mode of perception. Meditators could sink into deep meditation by swithcing their mind over to the Tattva mode.

“Dharana on those constituents which comprise one’s own body and the whole universe, such as the tattvas and tanmatras, from subtle to subtlest, leads to the source of existence. (In this way) Paradevi, the supreme goddess, (is revealed) at the end of meditation.”

A scientist’s view of the subtle nature of this creation and the Tattva view is similar. Shouldn’t a scientist then be able to meditate effortlessly? The missing ingredient is the ability to “switch” the mind. This skill can be cultivated with a bit of a guidance from a meditation expert like Sri Sri Ravishankar. I was amazed to know of this technique and many other profound techniques during the “Unveiling Infinity” sessions with Sri Sri a few months back. One doesn’t have to be a scientist to pick up several practical techniques from the “Unveiling Infinity” sessions.