Posted on December 6, 2013
Since Indian festivals are timed astronomically one can move the clock back and study festival dates even in a pre-historic century. Indus Valley clay tablets show that Shiva worship was prevalent during those times. Understanding the season, the time of the year and the night sky configuration when Shivaratri was celebrated during those times is an informative exercise. 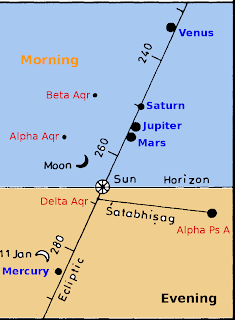 Shivaratri is celebrated in a month whose full moon is seen in Magha Nakshatra. Nakshtras are divisions through which the planets appear to move in the sky and are 27 in number. Shivaratri day coincides with the 13th phase of the waning moon in the month of Magha. Shivaratri is on Feb 27th in 2014 which is two months after the winter solstice. How far was Shivaratri from winter solstice* five thousand years ago? Anyone can use planetarium software and find this answer today.

K.D Abhayankar, an Indian astronomer analyzed the Shivaratri which occurred just two days before the winter solstice in the year 3104 BCE. As is usual for this day. the crescent moon was visible in the Eastern sky right before the sunrise. But the eastern sky also presented a rare sight! Four planets, namely Mars, Saturn, Jupiter and Venus were in close proximity. The planet mercury too was in close proximity but was invisible as it rose after the sunrise that day.

Winter solstice was an important event during Vedic times. It marked the start of the year long Savana* fire ritual. Vedic civilization was amazed at the sight of Shivratri moon and Sun being accompanied by planets in the eastern horizon welcoming their new Savana year. Kali Yuga started two years later, on Feb 17th, with the Sun and the Moon jointly rising at the 1st point of Aries. The Yuga indeed started with a planetary alignment of cultural significance which could not be comprehended by colonial translators of Indian astronomical text! Read in “Ancient Skies and Astronomy Now” more ideas which most popular translations of Vedic texts ignore.