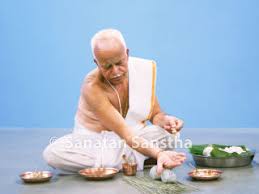 Rituals and astronomical configuration sare closely related per Indian tradition. Different conventions have been followed over the millinea to determine celebratory days and times. For example, Pitru Tarpanam or the offering of waters as a mark of respect to ancestors is done on Amavasya or a new Moon day. Pitru Tarpana is done only after noon; it is important that New Moon phase be present at the time of its performance. Bhodayana, a Rishi whose book of conventions continues to be popular to this day specifies the calculation of the new moon period in a certain way. Another Rishi, Apastambha, whose book of conventions is also widely followed, does not agree completely with the criteria in Bodhayana’s book.

Vedic traditon provided freedom for multiple conventions to exist to accommodate change of customs across era or geographical zones. The basis for all convention are clearly stated and contemporary experts could critique the logic behind any proposed conventions. A new convention gained acceptance only when enough experts accepted the associated logic. There is an astronomical basis for Bhodayana’s convention for the start of the Amavasya phase of the moon. It is difficult for non-experts to appreciate astronomical nuances. Tradition often attempted to convey the importance of a new convention through stories to those people. The following story is related to Bhodayana’s Amavasya convention.
The previous Yuga or Era was about to end in a few years.Dialogues to prevent a great had failed. Duryodana, the leader of one of the opposite camps wanted to consult astrologers to fix the begining time of the war. One of the greatest astrologers of the time was Sahadeva, one of the five Pandava brothers who were the leaders on the other camp Duryodana sought Sahadeva’s help and Sahadeva agreed to Duryodana’s request to uphold the code of conducts for astrologers. Sri Krishna, the advisor to the Pandavas tried to convenice Sahadeva from grantng Duryodana the benefit of a favorable start time. Duryoda declared that the war would begin on the following Amavasya day and left Sri Krishna with the only other course of action.
Sri Krishna began offering Tarpana waters before the onset of Amavasya. The confused Devas, the celestials approached the Sun and Moon and they all appeared in front of Sri Krishna to seek clarification. Sri Krishna completed the Tarpana water offerings before responding to the Devas. He asked them the definition of Amavasya to which they answered in unison that Amavasya occurs when the Sun and the Moon appear together in one spot. In a sense, the Sun and the Moon were present at the same place, in front of Sri Krishna. The Mahabharata war began that very day.
Panchangam Calendar makers calculate Bodhayana and Apasthamba Amavasyas based on slightly different technicalities for both. Sometimes those Amavasya days are different and sometimes they happen to be on the same day.