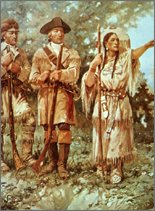 The Ottoman Empire had closed all land routes from Europe to South Asia in the fifteenth century. Columbus set sail to find a new route to South Asia in 1492 and he made history by becoming the man who “discovered” the Americas. The natives of the Americas today find irony behind the “discovery” of Americas. Europeans depended on the geographical knowledge of the natives to spread out to the vast lands of the American continent. Lewis and Clarke, whose expedition found the “Oregon trail” to the pacific coast had documented the help provided by several native tribes. The natives had superior idea of landmarks, rivers and mountains in the new territories. Native Americans had different concepts of geographical space than those held by the Europeans. They happily translated their sacred landscapes onto cartographic media which included relief maps modeled with sand, dirt and snow. The sacred space of the natives then began fading!

Europeans found well developed societies when they came to Asia. There was little for them to discover geographically in South Asia. Their biggest challenge was to understand the cultural heritage of the land. The Vedas, the fountain head of the cultural heritage of the people of the Indian subcontinent, had remained a mystery to European scholars for a long time until they found a break with the manuscripts of Sāyaṇa, a fourteenth century Pundit from South India. His manuscripts not only explained the Vedas but it was a store house of references to literary works, some of which could be understood only through commentaries written by authors during historical eras. Sāyaṇa’s references went from three hundred years before his time to three millennia earlier. It provided European scholars such as Max Muller numerous clues about the history of the sacred Vedic tradition.

Few researchers have looked at Sāyaṇa’s works from the angle that it is a gateway to the Vedic past of the Indian subcontinent. What clues of Sāyaṇa may Max Muller have likely misinterpreted? What were the clues? Did the sacred history of the Indian subcontinent fade away just like the sacred space of the native Americans with this incidence? My upcoming book captures a few answers which I found by researching into the correspondences and notes of Max Muller and his colleagues which lie hidden in scholarly archives.