The famous rust resistant Iron Pillar in New Delhi was a part of an ancient Astronomical observatory some 750 miles away from its current place. It was claimed as a war trophy by Islamic rulers who moved it about 700 years ago from its original place in the Udayagiri mountains. The enigmatic cave temple complex in Udayagiri once was an active sky observatory which was used by experts familiar with astronomical models found in Vedic texts. 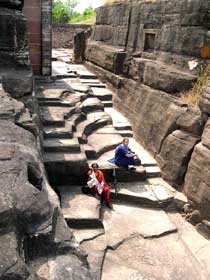 The pillar was placed at the entrance of a passage cut through rock and it cast shadow into the passage as the Sun rose on Summer solstice day. The rays of the rising sun still falls on the feet of reclining figure of Vishnu in the cave adjacent to the rock passage. Markings on two hilltops, on the north and the south clearly show the astronomical significance of this site. The stone pillar found on one of the hilltops is a twin of the iron pillar and it once held on its top a Nakshatra Chakra. The presence of Nakshatra chakra was ingeniously identified by carefully putting together fragments from the original Chakra.

The use of Nakshatras as markers in the sky ( Ancient Skies and Astronomy Now book) to observe movements of planets goes back 5000 years. Inscriptions in Udayagiri caves help date the iron pillar to 400 CE, to the time of the emperor Chadragupta II Vikramaditya. Most archeologists however agree that the cave complex is much older. Older fire rituals required accurate knowledge of solstice, equinox and other astronomical events. The oldest temples arose on ground made sacred by such ancient Vedic rituals. A better understanding of the Vedic civilization appears to be in the clues which connect the use of sacred sites before and after the Buddhist centuries