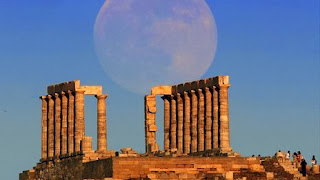 A tutor and musicians in the classics in Oxford University, through his research has brought a thousands of year old song back to life. The story of this resuscitation can be found on BBC news webpage. The researcher notes that in ancient Greek the pitch went up on some syllables and down on some. Vedic chanting too modulates the pitch in a very algorithmic way as specified by Chandas encoding (See the book Croaking Frog). The researcher also cautions western “ears” that the singing of the reconstructed melody may not follow preconceived notions about Greece music as it sounds Indian/Middle Eastern.  Listen to the music here


The song’s lyrics hint that the composer must have been a man of wisdom.

While you’re alive, shine:
never let your mood decline.
We’ve a brief span of life to spend:
Time necessitates an end.
Greek Philosophers respected and appreciated wisdom from the land of the Vedas. But academics today are sowing the seeds of division even among ancient civilizations which had so much more in common. The Celtics too shared so many customs with the Vedic civilizations  but today today’s descendants have no awareness of the past.