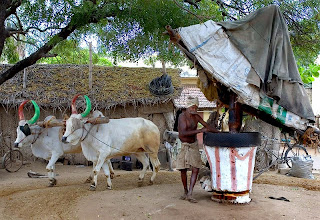 There were half a million small scale oil extraction facilities in India, almost one per village in the early 1900. Simple machines driven by animal power met the needs of the entire population. Housewives, then, relished the freshly pressed mustard, coconut, peanuts and sesame oils. During the British rule the number of units had fallen to 140,000 and then increased to 300,000 during Mahatma Gandhi’s Swadesh movement. Today India is the second largest importer of cooking oil. Indian housewives are marketed sophisticated, refined and heart healthy oils such as Canola oil while smart consumers in the US are moving away from it.

According to Cory McArthur, Vice-President, Canola Council of Canada “ India can benefit from the availability of heart-healthy canola oil. When used in the place of saturated fat, canola oil can reduce the risk of heart disease”. Canola has quickly claimed the title of the “wonder oil” – low in saturated fats, rich in omega-3 fatty acids. It is made from genetically modified rapeseed. The conventional use of Rapeseed oil  has been in candles, soaps, lipsticks, lubricants, inks and bio-fuels.  Long term use of the oil (over ten years) is associated with (Dr Axe) the destruction of myelin sheath (protective coating around the nerves) and to lead to Multiple Sclerosis. Canola oil depletes Vitamin E, interferes with normal metabolism and enzyme function and suppresses the immune system. Erucic acid found in high concentrations in the rapeseed oil is associated with fibrotic lesions of the heart.

The smarter consumer population in the US is running away from refined and GMO to cold pressed and natural oils even as the Indian population is being weaned from native oils such as coconut oil. Health conscious consumers in the US want the extra virgin oils that was in plenty in Indian Villages a century ago. Indian Government is facing record foreign exchange deficits. Is the world more irrational in the 2000s compared to the early 1900s?